The rear harness is much harder to replace because of the tight bend required to route it into the engine bay through the driver’s side quarter panel. People will chop off the test connector wires, sometimes, but that usually does not effect the operation of the car. I always see the ends that connect to the generator being pretty menke. Sometimes these wires have been chopped so much that they barely reach their destination.

The harness goes from that quarter panel section and breaks out a little under the rear seat: 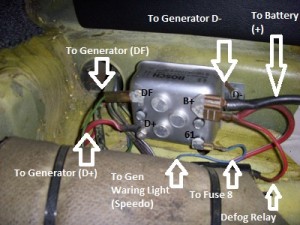 Some of that connects to the voltage regulator that is mounted on the bottom section of the driver’s side quarter panel, under the rear seat. That breaks out like this: 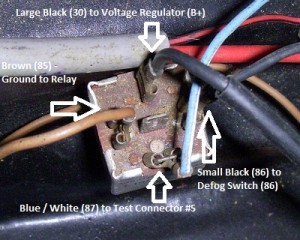 From here, the harness runs along the channel created between the body pan and the body. It is supposed to then route up in the crease between the kick panel and the wheel well (there is a hold-down there), and then back 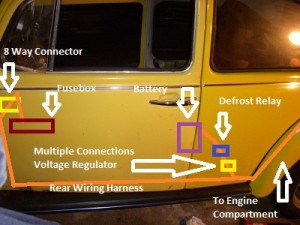 the other direction, right along the side of the car to the driver’s left knee. It is joined up with both of the Front and Door wiring harnesses (I like to route my Antenna wire here also) with a hefty clip at the top of the kick panel and a little under the dash. There is another one of these just to the left of the fusebox, and two more that are integrated into the dash itself on either side of the steering wheel (hard to see). There is an 8-way connector here also that connects the rear wiring harness to the fusebox. The wires on one side of the connector are the same color as the ones on the other; the connector only plugs in one way.

There is another harness that contains 5 wires that runs from the dome light (left of the driver’s head) through the door pillar, then to each door switch (passenger and driver) and finally into the cabin. It connects to one of the 8-way connectors and one wire routes up the the Speedo. That harness breaks out like this: 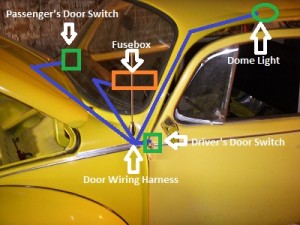