It’s time to rebuild that old engine of yours.  Mine had been treated very poorly by the car’s previous owner, hence the oil, dirt, grime that you will see in the pictures.  The case was beyond repair, so I had to buy a replacement engine, which in the long run was cheaper.  OK, back on track, have a VW engine stand, and the engine mounted to it.  We are going to remove the fan shroud from the rest of the car. 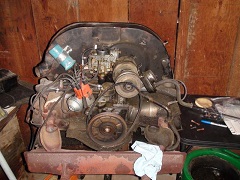 The shroud is the large black thing on the back of  the engine with a blue coil mounted to it.  The first thing we need to do is take the generator belt off.  To do this, there is a nut torqued to 43 ft-lb, which will turn the engine when attempting to remove.  You’ll need a large flat-head screwdriver to to insert into one of the two slots on the pully.  Be light with the wrench, or you can easily bend this pully with the screwdriver. 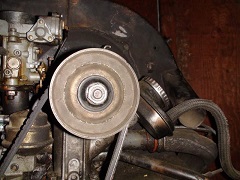 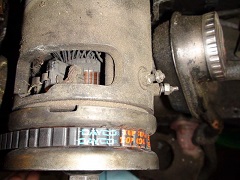 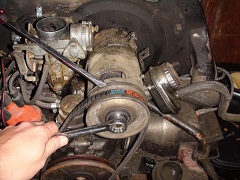 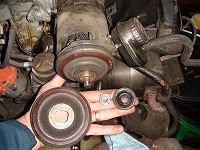 There, the generator pully nut is off.  Note the shims: try to keep them in the same order they came off the car.  Now let’s remove the generator strap from it’s pedestal.  There is a wide band that hold the generator onto the generator pedestal.  It’s pretty easy to remove, just undo the fastener and done.   Mine was a Phillips screw, but yours could be different.  Take the band off and put all of this, including the nuts and shims into a bag and label it “generator”. 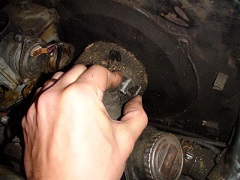 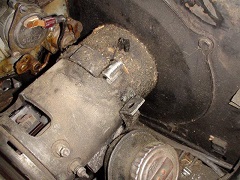 Now, with the generator freed, we can locate the tin screws that hold the shroud, or in VeeDub “Dog House”, off the engine.  There is one located on each side of the engine and two in the rear.  Once those screws are out, put them into a bag labeled “Shroud”.  Take the shroud straight up as to not damage the oil cooler. 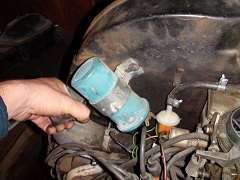 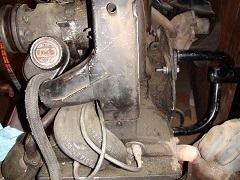 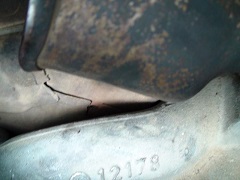 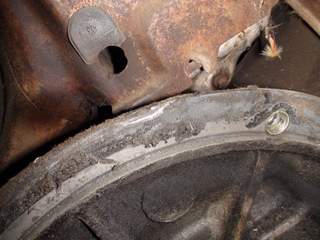 There we are done with this part.  Next we will take the rest of the “accessories” off the engine… 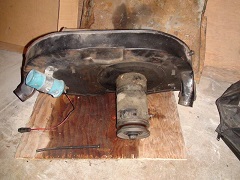